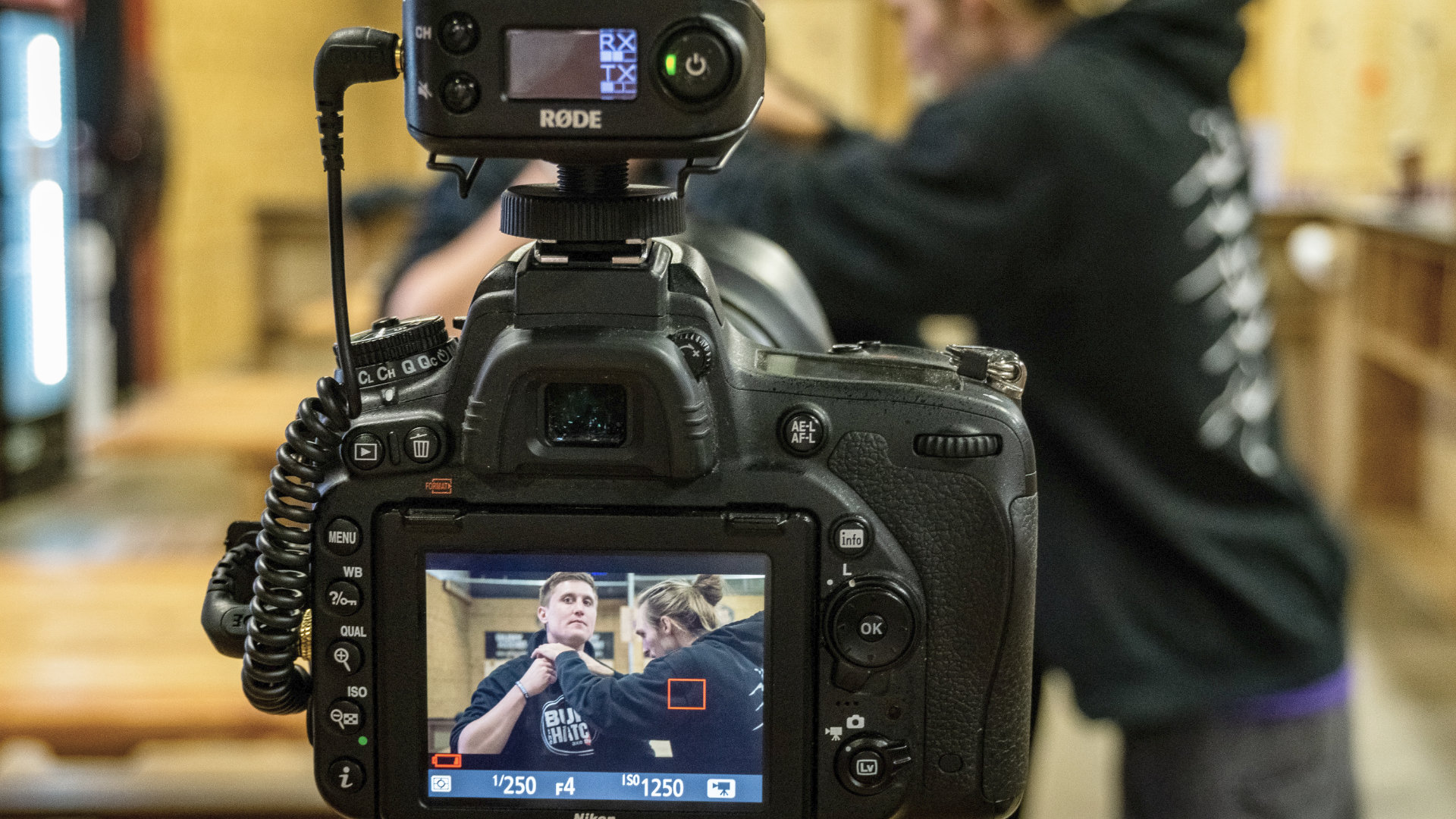 Whether you’re on a budget or on the job, there’s a lavalier microphone for you.

That’s why we’re looking at 4 of the best lavalier microphones for vlogging and YouTube.

Just like you, I too was searching for a lavalier microphone I could use indoors/outdoors, with my DSLR camera and/or with my smartphone.

However, the decision definitely wasn’t an easy one considering how many lavalier microphones (and different types thereof) there are on the market.

That being said, at least we have a focus today… VLOGGING AND YOUTUBE.

The lavalier microphones we’ll be looking at today definitely keep affordability, portability and connectivity in mind. I’ll even recommend one that you can rely on for your professional gigs.

So, without further ado… Let’s dive right in!

The Synco G2 will definitely give you the most value for your money.

What’s most impressive about it is how much you’re getting for such an affordable price.

The external lavalier microphone isn’t necessary (because the transmitter has an integrated omnidirectional microphone), but it’s a nice addition.

As far as I’m concerned, they sound pretty much identical.

In fact, the Synco G2 also sounds pretty close (if not identical) to the Rode Wireless GO II (which we’ll be talking about next).

These two lavalier microphones are often compared against one another.

In my opinion though, the Synco G2 is WAY better equipped and sounds just as good despite having a few shortcomings.

To be more specific…

Personally, I was ready to overlook those flaws.

If you’re looking for something a little more reliable though, then keep reading…

Unless you’re REALLY looking to save some cash, you’ll be better off with the RODE Wireless GO II. It’s definitely got more reliable communication (still not the best though) and a brighter LCD.

It’s also got a companion app that allows you to configure the transmitter to record internally (7 hours uncompressed/24 hours compressed).

That’s a HUGE advantage if you experience drop-outs.

The only real drawback with the RODE Wireless GO II is that you can’t monitor your live audio (the Synco G2 can) and it doesn’t include NEARLY as much.

To be more specific, the RODE Wireless GO II doesn’t include…

In every other aspect, the RODE Wireless GO II is almost identical to the Synco G2.

I would just feel much more comfortable using it for professional gigs like weddings, interviews, etc… However, I’m NOT a videographer (I get hired to boom, not to clip mics).

That being said, I definitely recommend the RODE Wireless GO II for solo-videographers.

The Shure MVL is the only WIRED lavalier microphone on my list.

So, why am I recommending a wired lavalier microphone specifically for smartphones?

Well, chances are that if you’re using your smartphone to vlog and make YouTube videos, you’re on a budget. It’s also MUCH SIMPLER to use a wired lavalier microphone at close range.

So, not only is the Shure MVL affordable (it’s the most affordable on the list), it’s also the easiest to use because all you need to do is plug it into your smartphone.

The only thing you’ll need to keep in mind with the Shure MVL is that its cable is designed to connect to smartphones ONLY (it’s TRRS, not TRS).

If you’d like to use it on your DSLR camera as well, you’ll need an adapter.

Other than that, what I like most about the Shure MVL is its signal-to-noise ratio and its ability to reject ambient noise. It’s not perfect, but it certainly does what it needs to!

Lastly, it includes a convenient carrying pouch and a wind muff.

In my opinion, you’ll need to invest in (or make) a better windshield if you’re planning to use the Shure MVL outdoors. Wind muffs are cute, but not very practical.

The Sennheiser AVX-MKE2 wireless lavalier microphone system is definitely “overkill” for vlogging and YouTube, but it might be what you really need (if you’re looking for “broadcast-quality”).

Just to be clear, the Sennheiser AVX wireless system is independent of the MKE2 lavalier microphone (which I specifically recommend).

In other words, the AVX wireless system can be purchased with different combinations of microphones (for example, the Sennheiser ME2) or on its own (if you have already have your own lav).

So, what justifies the seemingly unreasonable price? BROADCAST-QUALITY AND PERFORMANCE.

In terms of wireless transmission, the Sennheiser AVX system is one of the best on the market.

It’s also got one of the most portable and compact designs. If you’re working with a DSLR camera, it can be mounted using your camera’s hot shoe and includes an XLR to TRS cable.

The only potential flaw I see if you’re planning to use the Sennheiser AVX-MKE2 with a DSLR camera is 48V Phantom Power.

To be more specific, your camera’s ability to deliver it…

If not, then the AVX receiver can still be powered using the internal battery (which lasts only 4 hours) or by an external USB battery pack (which makes it less portable).

However, the transmitter’s rechargeable battery lasts for 10+ hours.

That being said, the Sennheiser AVX-MKE2 is still one of the best options for professional videographers, but I don’t necessarily recommend it for your own personal vlog/channel.

I only recommend it if you’re ALSO planning to do paid work with it.

Are Lavalier Microphones The Best Choice for Vlogging and YouTube?

The simple truth… NO.

However, lavalier microphones are definitely the MOST CONVENIENT type of microphone for vloggers and YouTubers (especially if you’re going solo).

Lavalier microphones are like the GoPros of the microphone world.

That being said, that might not be possible depending on your situation…

If you’re making videos outdoors, the best thing to do would be to hire a boom operator to follow you around with a shotgun microphone. I definitely DON’T RECOMMEND those cheap shotgun microphones that you mount onto your camera.

It needs to be as CLOSE as possible!

If you’re making videos indoors, the most popular choice would be to use a high-quality condenser microphone. However, you could technically use any type of microphone.

I personally use a Sennheiser MKH 416 (shotgun microphone) indoors as well.

It just really depends on your setup and if you’ll be stationary and/or moving.

That also means that lavalier microphones can be used indoors if the situation calls for it. Personally though, I always try to keep them as a last resort.

Like I said though, you won’t have much of a choice if you’re working alone.

Lavalier microphones have made it possible for vloggers and YouTubers to produce content all on their own. That’s why they’re an EXCELLENT option for vlogging and YouTube.

Just in case you need to compare the lavalier microphones we covered today, here’s a convenient table I drew up…

So, those were 4 of the best lavalier microphones for vlogging and YouTube (according to me).

I think I provided enough variety to accommodate just about any situation, but there are definitely LOTS of other options out there.

If nothing else, just remember these two facts…

Also, make sure to purchase the appropriate adapter if you’re planning to interchange between the two. However, I personally have one for each situation (wireless AND wired).

Lastly, just take into consideration HOW FAR you’ll be positioned from your receiver.

In most cases, the Synco G2 should provide more than enough reliable range. The Sennheiser AVX system is definitely your best bet if you want maximum reliability though (especially over 100 meters).

So, which lavalier microphone will YOU be using for vlogging and YouTube?

Let us know in the comments and feel free to ask me any questions there as well. Also, don’t forget to join Decibel Peak on Discord and to support us on Patreon if you enjoy the content.