After months of searching, I finally acquired my first pair of congas! I was getting frustrated with the sample libraries I was using since they were more complicated to figure out than playing the real instrument. However, you’ll probably be looking for the best way to record congas at home once you get (or already have) your own pair!

The best way to record congas at home is to use a pair of dynamic (moving-coil) microphones, but it’s not the only way! It’s always optimal to use moving-coil microphones at home because of their ability to really focus on sound sources. However, that also means that the microphones will be placed quite close to the congas which has its disadvantages in this case. If you’re interested in finding out what that’s all about and how you could potentially avoid this problem altogether, keep reading!

The main issue with recording congas at home with dynamic (moving-coil) microphones is what we refer to as the “proximity effect”. In layman’s terms, it basically means that the closer you get to the microphone, the more the bass frequencies are emphasized.

That’s why voices on the radio sound so boomy and full!

When it comes to clarity though, placing your dynamic microphones too close to the congas can result in “muddy” sounding tracks. The high-end articulations such as overtones and slapping won’t sound their best.

Sure, the advantage is that you’ll be eliminating the most ambient noise.

But at what cost?

For congas in particular, I only recommend using dynamic (moving-coil) microphones if you’re really having issues with ambient noise (neighbours, ventilation, etc…).

However, you can still get some pretty good results if you place your microphones correctly.

Using the right microphone can also work miracles (I use these)! 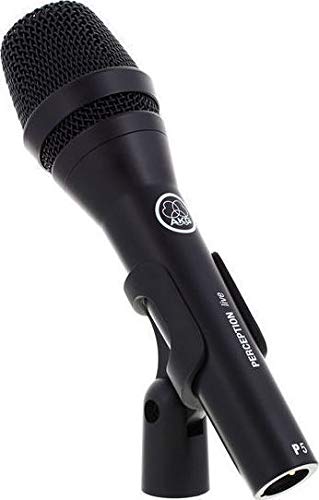 I suggest placing them as far as you can without losing too much focus. That’ll probably be somewhere between 3-6 inches. Just remember that the further you place the microphone, the more you need to raise the gain.

The more gain you use, the more ambient noise is captured.

My personal favourite way to record congas at home is to use small-diaphragm condenser microphones. It’s much more difficult to get a “clean” track using these very sensitive microphones, but the risk is worth it for the congas.

The transient response is also much better on condenser microphones.

Each nuance of your playing will be captured which wouldn’t necessarily be the case with dynamic (moving-coil) microphones. Of course, that also depends on the variety of styles you’ll be interpreting with your congas!

Generally speaking though, small-diaphragm condenser microphones are the go-to for 99% of conga players since most players use combinations of bass, overtones and slaps.

Unlike dynamic (moving-coil) microphones, you’ll be placing these much further away.

I usually place them the length of two drum sticks (about 2 feet) away from each drum.

Pointing them at the skins/heads will result in more percussive overtones. However, you can also point them more towards the shells to get more bass/warmth. Some engineers even place them under the shells, but I don’t recommend this method on its own.

The optimal positioning would be to use X/Y or ORTF/NOS over the congas.

I personally use the Samson C02 (pair). 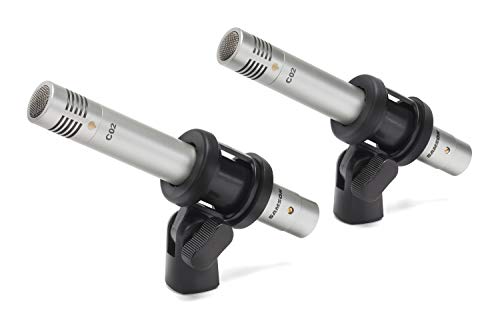 Something I considered doing was using a single dynamic (ribbon) microphone to record both congas. Since ribbon microphones are bi-directional (figure-of-eight) by nature, it’s the best way to get the illusion of stereo in mono.

These types of dynamic microphones are designed to be placed much further from the sound source than dynamic (moving-coil) microphones. Placing them too close could actually permanently damage your ribbon microphone!

Other than that, I think they’d make an excellent choice for recording congas!

You’ll lose some high-end “sparkle” compared to the more modern-sounding condenser microphones, but it may be better for your mix anyway.

Unless your congas are the lead instrument, you’ll most likely be cutting some treble anyway.

That being said, you should already have an idea of which microphone to use depending on the type of register you’re targeting. Ribbon microphones are great for bass and condenser microphones are optimal for treble.

If you were going to use ribbon microphones though…

To get more of the room/stereo sound, you can place the microphone slightly off-axis, but I think it’s best to point the front end towards the sound source. The rear will certainly get some of the room sound and the reflections, so make sure your room sounds good!

Should I use more than one microphone to record congas?

It’s true that there are oftentimes two (sometimes even three) congas, but does that mean we should be using multiple microphones? I think the answer to that question depends on your personal taste.

I usually pan my congas either left or right, so it actually doesn’t matter in my case.

Using at least two microphones can certainly add some wideness to your sound, but remember that the congas are placed right next to one another. To your listener, it sounds like one instrument, not TWO.

That being said, there’s no point in exaggerating the stereo effect (unless it’s a solo performance).

And remember, more tracks means less space in the mix.

Unless you really want to feature your congas, I personally think that using one microphone from one of the three types we discussed would be more than acceptable. It’s less ideal if you’re using dynamic (moving-coil) microphones though.

It’s just difficult to capture both congas since they’re much less sensitive than the others.

The last thing you may want to consider is using more than two microphones.

You could potentially have your two “overhead” microphones doing most of the work while having an extra pair of dynamic (moving-coil) microphones positioned beneath the shells to mix in some more bass.

It’s optional, but it’s definitely been done before!

How I personally record congas at home?

I use the same microphones that I use to record my drum kit, the Samson C02 stereo pair (you can read my review here). They’re cardioid small-diaphragm condenser microphones and they sound great, not to mention that they’re super affordable.

I usually only use ONE of them to record congas though!

Large-diaphragm condenser microphones would work better if you wanted them to sound BIGGER. If that’s your intention, then I recommend checking out my review of the RODE NT1-A as well!

It’s a shame because these types of microphones are great for recording just about anything at home. It’s just a question of sacrificing some clarity in the top-end for less ambient noise.

However, I assume you’ve got somewhat of an ideal location if you’re able to play congas! Right?

They’re pretty loud too, so the performance itself should drown out some of the noisiness. That being said, I personally recommend condenser microphones. Ribbon microphones are great as well, but they’re much more expensive and even more difficult to work with.

If you have any questions, feel free to leave them down below. I’ll also be leaving you with some microphones to check out if you’re interested in using what I use.

I hope you’re feeling ready to start recording congas at home! The best way to start is to experiment and see what works. It’s difficult to recommend anything specific since there are so many variables in sound recording (room, size, etc…). However, you’ll find everything you need to get started at Decibel Peak. Make sure to check out some of the other articles I’ve written on the subject. Thanks for reading!