It’s much easier to record drums at home using triggers instead of microphones because you’ll be triggering professionally recorded samples instead of using your own sound recordings. If your recording studio isn’t as “professional” sounding as you’d like it to be, this alternative may be able to fill that gap. The rest of this article will cover how to record drums using triggers and how to combine that with the use of two additional microphones (in “Recorder Man” configuration). I think you’ll really enjoy learning about the perfect hybrid setup for recording drums at home!

What are drum triggers anyway?

If you’re familiar with MIDI/USB keyboards, then you know what drum triggers are! Essentially, they’re like “sensors” that detect the impact of your drum strokes and convert them into signals.

However, the signal isn’t usable “as is”.

In order to convert the signal into a “trigger”, we need to connect our drum triggers to what we refer to as a drum module. It’ll basically turn these unusable signals into usable MIDI notes that can be used to trigger actual sounds (samples).

To summarize, you’ll need these 3 tools:

The drum triggers themselves are installed on your drums.

The drum module is connected to your computer/DAW (like an audio interface).

The sample library is hosted in your DAW (as a plugin).

The limitations of using drums triggers

The only thing you’ll need to keep in mind when using drum triggers is the fact that they can only be used with DRUMS, NOT CYMBALS. That’s why we’ll be combining this setup with the two microphone “Recorder Man” configuration.

However, you could always purchase yourself some electronic cymbals (which are basically triggers in themselves).

That’s not what I’ll be doing because at that point, you’d be better off working with an electronic drum kit and saving yourself the hassle!

So basically, we’ll be using our triggers to track our:

Everything else (including these drums) will also be recorded using the microphones.

What this means is you’ll be getting the best of both worlds. The “essence” of your performance will be recorded using the microphones (in “Recorder Man” configuration) and the triggers will simply be used to add more layers to your sound.

However, there are some drawbacks to working this way, so we’ll be looking at solutions in the final sections.

The drum triggers I’ve selected for our project are the ddrum Red Shot 5pc Drum Trigger Set. They’re from the same manufacturer that created the ddrum Hybrid Kit (which I’ve always wanted). 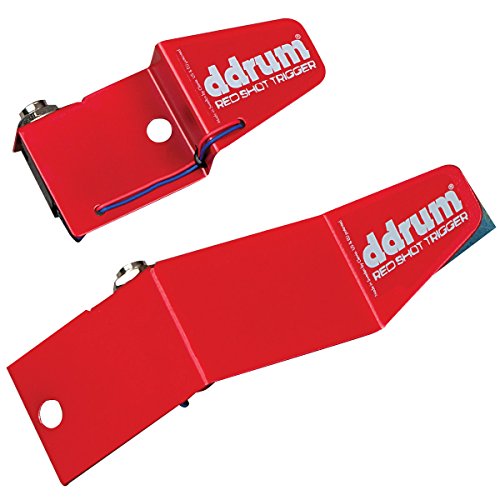 Basically, we’re using the same ingredients to create our own “hybrid” drum kit!

Since there are 5 triggers in total, you’ll have one for your kick, snare and 3 of your toms.

They’re very easy to install and won’t require you to modify your drum kit. The difference with the ddrum Hybrid Kit is that they’re permanently mounted on the inside of the kit. However, you’ll need to think about purchasing a drum module which isn’t included.

I simply decided to go with the ddrum DDTI Trigger Interface. 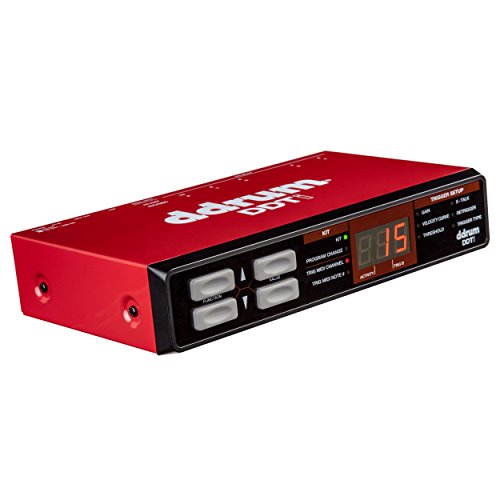 It uses USB to connect to your computer, but the MIDI output also allows you to save on space by connecting it to your audio interface instead. Most audio interfaces don’t have MIDI inputs though, so it’s obviously optional.

The additional inputs are also useful if you ever plan on expanding your hybrid setup.

How to record drums using microphones AND triggers

Just to be clear, you’ll essentially be using an audio interface (for the microphones) and a drum module/MIDI interface for your triggers. In other words, it’s like recording two instruments at the same time (to your computer anyway).

To avoid latency issues, I recommend NOT using the sample library while tracking.

The best way to record your drums using this hybrid setup is to track using your microphones (direct monitoring, ideally) and to leave the rest for post-production. The MIDI tracks created by your drum triggers can easily be assigned to your sample library during the mixing stage.

Layering these samples on top of your “acoustic” performance is basically a mixing technique.

So, I think the emphasis should be placed on getting your main drum performance sounding really professional and the triggers are basically used to add more depth to your sound.

HOWEVER, if your audio track really doesn’t sound that good… You could use your entire drum trigger performance as some form of “backup plan”.

In other words, we can simply mute the audio track and use the sample library exclusively.

However, you’ll obviously need to add the cymbals manually using mouse/keyboard or another MIDI/USB controller.

That’s how the professionals would do it (always have a Plan B)!

What if the audio (microphones) doesn’t line up with the MIDI (triggers)?

One of the biggest restrictions when it comes to using this technique is that you CANNOT quantize your MIDI performance. Audio tracks cannot be quantized in the same way, so you’ll most likely end up with some synchronization issues.

What this means is your time needs to be REALLY GOOD.

However, we can use the same concept covered in the previous section (i.e.: muting the audio track and working with MIDI exclusively).

It’s actually one of the reasons I like this technique so much. Instead of relying on your audio track or your MIDI track, you’re actually giving yourself many options to choose from. If you’re working on professional projects, you know how important it is to have options.

When time is of the essence, it could really save your gig!

SO… You can basically forget about quantization if you want to use both audio and MIDI.

I really hope this article has inspired you to start thinking about recording drums differently. In this day and age, the impossible has been made possible thanks to amazing innovations such as the drum trigger!

If acoustics are as important to you as they are to me, you’ll really enjoy the versatility of working with hybrid setups.

I really like the concept of combining analog/digital technology.

If you enjoyed learning how to record drums using drum triggers with me, there are plenty more articles for you to check out. As I mentioned in the beginning, I recommend starting with my article on how to record drums at home using two microphones.

You’d be surprised what kind of quality the “Recorder Man” configuration could provide on its own!

If you have any questions, don’t hesitate to leave a comment. I’ll also be leaving some links the the products we’ve covered today if you’re interested in using my “recipe”.

Recording drums using triggers is much more affordable than using an entire arsenal of microphones. If your recording space isn’t suitable, I also want to prevent you from investing in something that will ultimately disappoint you. Anyone recording anywhere can use drum triggers and achieve phenomenal results in the process! If you’re new to Decibel Peak, make sure to check out some of our other content and don’t forget to follow us on social media for the latest updates. Thanks for stopping by!